Could it be possible to gather twenty-five handspinners from across North America and unite them into a team through cyberspace?

I, along with 24 others, have been doing just that during National Spinning & Weaving Week !  Spinzilla is a global event where teams and individuals compete in a friendly challenge to see who can spin the most yarn in a week! Since its maiden voyage in 2012, Spinzilla has  inspired spinners all over the world to join the tribe.

Once again our team members stretched across the USA! Roughly placed on the map, the yardage our team spun would let us travel this route 8.5 times! Road trip anyone? 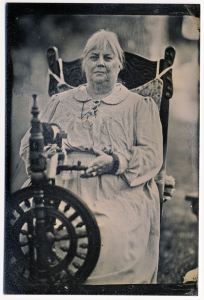 In the summer of 2014, Irene Schmoller, head-honcho (later to be known as “Fearless Leader”) and founder of Cotton Clouds, asked me to be Team Captain of her newly formed Spinzilla Team Cotton Clouds’ Cotton Tails. Truth be told, she chose me because I was her most active “LIKE” on Cotton Clouds’ Facebook page.  I would respond to every post with some sort of witty comment or drool over her luscious products.

We started out with only eighteen spinners the first year, but have grown so that Team Cotton Tails maxed out at 25 spinners.

We were team thirty-nine out of fifty-four in 2014 but rose to team twenty-eight out of seventy-four in 2016. That’s quite an accomplishment! 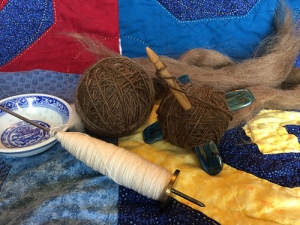 How did we do it?

As Team Leader, I was responsible for welcoming in our new spinners, getting them excited and introducing them to each other to build team comradery.

What seemed to work best for back and forth chatter among our team members was an email that asked them how they were doing.  A floodgate opened and they poured their hearts out about their joys of having a full week to spin as well as their frustrations at not having enough time to spin. We also filled up eight pages on Ravelry.

I ran a simple survey this year so that they would get to know each other. Questions that sparked the most response were Favorite Treat(s) to Eat or Drink While Spinning, Favorite Fiber for Fast Spinning, Favorite All-Time Movie you’ll be watching while spinning and Personal Spinzilla 2016 Goal.  Many reached or came close to their goals.

In truth, it was our spinners that built the team. They invited friends, advertised on FaceBook and at group meetings. It was in Ravelry and through group emails that they built friendships, sharing stories of hardships, delights and events in their lives. My job was to simply encourage them on with their preparation, keep them excited when they felt they wouldn’t make it and cheer with them when they hit their goals. Or, if the case might be, commiserate when they didn’t hit their goals to hopefully make them feel that they had done a great job at just participating.

We all had so much fun that most of the team has said that they want to participate on OUR team next year. Many had been on the team for four consecutive years. Most, but not all were thrilled to spend their time perfecting their cotton spinning skills.

Here are some quotes from a few of our happy spinners.

“Once again, it’s been a great adventure, and fun to be “with” old friends & new. We did well, didn’t we? I’m proud of us! Every year it’s a challenge to see if I do this or that better than the year before … spin more evenly, more quickly, more efficiently; plan better, prep better, organize better. Mostly it’s an upward curve, with the odd stupid downturn, like neglecting to have extra drive bands on hand! So every year one hopes to learn / improve / achieve a little more. My singles have all become 2-plies and bands are replaced. Ready for next year … bring it on! Cheers, one and all!” Sue 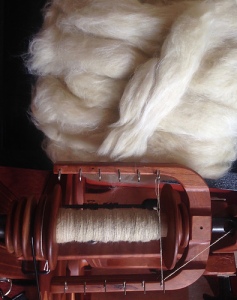 “Well folks, sorry I haven’t been posting on a regular basis. I retired in July and am not nearly as organized as I was last year. I spun every day, but life intervened and I didn’t get as much done as I had hoped. Nor did I document as well as I did last year. I did spend a half a day with Joan Ruane and got some great tips! I spun on a tahkli and on a charkha. I plied everything this year and plied on both the charkha and a Louet. I did not spin on the Louet.” Jill

Ours is a small story within the larger one of so many Spinzilla teams (seventy-four this year) world-wide that dedicated their time and efforts to do the best they could for the whole team. It was a true espirit de force that kept us all together within the spinning community.  We’ll see you all again next year!  Keep on spinning!

Irene Schmoller, Fearless Leader, loves to support Spinzilla.  She has been spinning since 1972.

Connie Child Peterson, Team Captain, is a living historian who teaches and demonstrates historical fiber skills. She has been spinning and weaving since 1973 and owns thirteen looms, ranging from band looms to a 36″, 8-shaft loom, along with three working wheels. Her favorite is a double-treadle traveler; a Kromski reproduction 1870 Polish wheel as her demonstration wheel and a very rarely used, very small upright ship’s wheel, probably used by a captain’s wife while sailing on the seas.

She and her husband live on six acres in Southwestern Minnesota with one dog, four cats and several Corriedale-cross sheep which are her main source of spinning fibers, although she has some Cotton Clouds’ fibers she promises to learn to spin!

See you next year at Spinzilla 2017! Connie & Irene